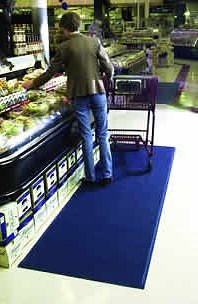 When placed strategically throughout the facility, matting systems are the first line of defence against slip-and-fall accidents and tracked-in soil and debris.

According to an industry expert, an effective matting system will help increase the life of a floor and present a consistent, quality appearance. In addition, entrance matting can help lower overall maintenance costs by decreasing the amount of dirt tracked into the building and improve safety by helping to reduce slip-and-fall accidents caused by water collecting on hard floor surfaces.

There are varying types of mats, designed specifically for certain surfaces in certain areas of a facility.

The most important and common type of matting is entrance matting.

By choosing a high-quality entrance matting system, nearly all dirt and water can be trapped, thereby reducing slip-and-fall potential.

“Entrance matting should cover an entrance, preventing 80 to 85 percent of dirt from coming into the facility”, says David Freedman, director of sales for The General Mat Company. According to David Freedman, there is also a standard formula for entrance matting, the order of which is important in ensuring a efficient matting system:

“Most people think that mats are only for entrances, but I believe that a mat should be placed anywhere that the public and non-public places meet, from a kitchen to a dining area, back halls to a lobby”, says Freedman.

There are several types of non-entrance matting that are used extensively in facilities:

Anti-fatigue – Available in a solid or sponge-like form, these mats are designed for dry applications where people stand for long periods of time. Hotel reception areas, grocery stores, hospitals and manufacturing facilities often use this matting to benefit workers’ health. There are also drain-though anti-fatigue mats for kitchen/food service areas, where grease or water is often present.

“You have to take into consideration the traffic levels and the environment,” says Freedman. “If the matting is in the kitchen, is it going to be exposed to greases. Or just water and soap This all factors in on what kind of matting you should choose. Think about placement in regards to functionality.”

However, mats that move or crumple up can be a hazard, so special care needs to be taken to ensure that matting remains stationary.

“Consider using a rubber pad under the mats to keep them from moving' says Freedman.

"If matting is placed over carpeting, Velcro can help." Freedman adds. "However, for overall safety, mats should be checked often, to make sure that they are clean, in place and therefore, functional."